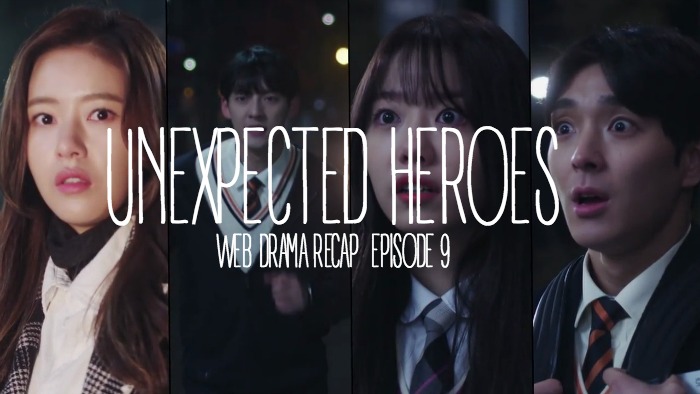 The main case from episode 1 is about to get solved and I am ready for it. These cases they have solved have been about 2 episodes each so we are at just the right amount of episodes for our team to solve this case.

OPENING
Wow, we jump right in with Joon-young sleeping and having a nightmare. He is realizing the last moments of the doctors’ brothers life. He sees a tattoo of a red Carmelia flower on the bad guy’s arm, by his wrist, and then he wakes up! His heart is going crazy! Soo-ho wakes up as well and asks Joon-young what happened.

Everyone wakes up and they ask Joon-young what he saw in his dream. he tells them that the dream was different today, he really saw that guy standing there. He tells them that their donor was killed, he is sure about it. His heart saw it. They have to tell samchon.

But the doctor doesn’t think that the kids should be involved in this. She wants to take care of it on her own. But the three superheroes really want to use their abilities to help. the doctor tells them that she has to check one thing out first. She goes to a cell phone repair shop.

SCHOOL
back at the school library, Yoon-ji is showing the librarian her book. They are sitting at a desk and he is asking her about the storyline, “So the genius investigator had a mysterious accident, but it is really a murder?” Yoon-ji tells him that is right, but a super duper bad guy is behind the murder. he tells her that this is good, but you have to have logical evidence. She said that she is thinking about something, she tells him that the main characters cell phone had a recording. He wants to know what was recorded there and what is the relationship with the murder? She says that she doesn’t know, but maybe it has something to do with Carmelia? What does he think?

He jokes and says why are you asking him, is he a criminal? She is the writer so she needs to figure it out. he said he likes if up to this point, it makes sense up to the accident point, she really wrote it realistically well, as if she saw it with her own eyes, in her dream. Now the librarian looks serious and some grim music starts playing.

He says he will look forward to the book and gives her the manuscript back. She leaves and waves; as he waves back at her, we see the Carmelia flower on his wrist. Dun dun dun!

APARTMENT
The doctor has prepared a meal for the three kids and they say that today is Dday. They go over what they are doing. The doctor has to pick up the cell phone and she tells them that they will have a dinner appointment later. They can meet at 7 pm. they wonder if samchon will also come, it looks like everyone doesn’t actually know what is happening, especially Joon-young who is thoroughly confused.

Later on, we see that the librarian leaves in a car and Joon-young gets in a taxi and tells it to follow that car.

CAR CHASE
The cars are following each other (and it is so obvious, omg). there are no other cars on the road. The bad guy stops at a light and puts on his cap. Joon-young wonders what is going on, but he sees that Dr. Noh is about to cross the street after picking up the cell phone. Joon-hyung gets out and starts running. The car charges to Dr. Noh and everyone converges on the scene for dinner.

Dr. Noh’s eyes get wide as the car charges her.

LOVE NOTES
Okay wow, this guy is going right for Dr. Noh which only makes me more curious as to why he wants to kill these people anyway. The brother was a detective, okay, I get it. But the sister? Sure she has this phone that might have some damning evidence on it, but he could always just steal the phone, does he really have to be so extreme? But then I realize that he is a murderer so murder is probably his go to for everything.