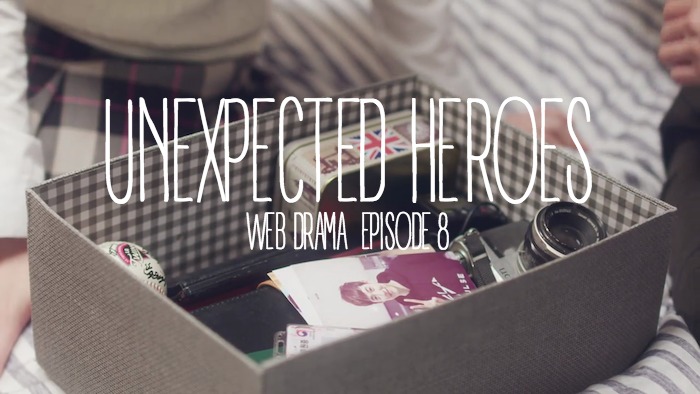 Soo-ho got to use his muscles to save Yoon-ji at the end of the last episode. The only problem is, he was getting beaten up pretty badly at the time. I think he’ll be okay though. What I really want to know is how Yoon-ji will deal with Joon-young ditching her. She has to feel crushed.

OPENING
We are back at the fight! Soo-ho is getting beaten up as he protects Yoon-ji, but the police show up and save the day. The uncle is upset at the kids and tells them to go home so of course, they do. But before they do, Soo-ji gives Yoon-ji a very big hug and thanks him for saving her. She gives him a kiss.

Yoon-ji and Soo-ho are in the car and Yoon-ji looks away, she is crying a little. Soo-ho tells her that she shouldn’t only see Joon-young (it’s his love confessions!).

Back at home, they are all ripped a new one by Soo-ho’s uncle. He thinks they are amazingly crazy to do what they did, which is true. But their backs were against a wall and they had to do it. They don’t tell him that though, they just apologize. Uncle says it is good that they are okay but the doctor says that she doesn’t want them to behave like this and just rely on their abilities. Uncle brings up that he knows that his Soo-ho is a lot stronger than before, but how could he take on all those gangsters and how could they find all this out?

They tell him that they have amazing abilities – superpowers. Uncle just yells at them and says they shouldn’t play with adults like that. But the doctor pulls uncle aside to talk to him.

The kids wait in the living room and Joon-young thinks that the uncle might crack.

HOSPITAL
Cut to the hospital where Soo-ho, his uncle, and the doctor are signing the transplantation paperwork. Uncle says a little prayer and that they are happy that uncle is an organ donor now. Soo-ho also wants to be an organ donor and the doctor says if his guardian agrees then he can become one also. (This part is so random, it is basically a little commercial for organ donation where it explains all about it).

APARTMENT
Back at the apartment, Yoon-ji has gone outside on the steps by herself. Joon-young sees her there and goes to sit with her. He asks what she is doing and if she is still angry at him. She says that she is not angry, but he says that she is, ever since they went to the loan shark office she doesn’t talk to him or make eye contact with him at all. He says that he was so scared, he couldn’t eat or sleep. But she tells him that he ate well and slept well. So he gets real with her and tells Yoon-ji that Soo-ji — but she cuts him off and tells him that she will listen to his three wishes. He thinks she is weird, does she think she is a genie? But she says she just doesn’t want to have any regrets, so shut up and just think about your wishes. She leaves.

FOOD DELIVERY
Cut to a food delivery to their home, but they didn’t order it. (**COMMERCIAL ALERT**) So they get this food delivery and they want to eat with everyone. Joon-young tells Yoon-ji that his wish is to have water and she brings it. Then he says he changed his mind, his wish is juice, so she gets it and tells him that she fulfilled one of his wishes.

Cut to the school, another one of his wishes is for her to do his homework. He wants to know if he did something wrong to her and she says that she told him that she would listen to three wishes, he said that he liked it. But he says he never did, he doesn’t like it at all. Is she sick? he grabs his HW back and says she shouldn’t do his homework. But she goes back to the wishes and says that this is his second wish right? They leave.

APARTMENT
Yoon-ji meets with Dr. Noh at home and asks for her opinion on a novel she is writing. The doctor is very impressed that Yoon-ji is writing a novel, does she want her to read it? Yoon-ji wants the doctor’s permission because the main character is her organ donor. The doctor wants to know how she knows about the organ donor and Yoon-ji tells her that she wants the doctor’s approval, she won’t write about it without it. The doctor agrees, she thinks that it is nice if someone remembers him, so she has to write a cool novel. She gives Yoon-ji some of her brother’s belongings, like a broken cell phone and other things.

But then the cell phone turned on! The doctor thinks this is strange, but maybe it never turned on because it was wet all those months ago. They listen to it and the brother is talking, they hear him and then they hear the crash. It cuts off after that. But they heard the word, Carmelia, which is a flower. (Korea has a Carmelia island, I wonder if this is related).

They figure out that her brother’s death was not an accident.

LOVE NOTES
I was waiting for this and I’m happy that it is finally here. I am so ready for this team to find out about the brothers murder and everything that entails. Honestly, I thought this would be the very first case that the team of heroes would solve, but I have been pleasantly surprised with the little crimes that they have been working on. I actually want them to do more of those, but it’s episode 8 so we need to start to wrap this up. These cases they have solved have been about 2 episodes each so this phone clue is coming at just the right time for our team to solve the case.