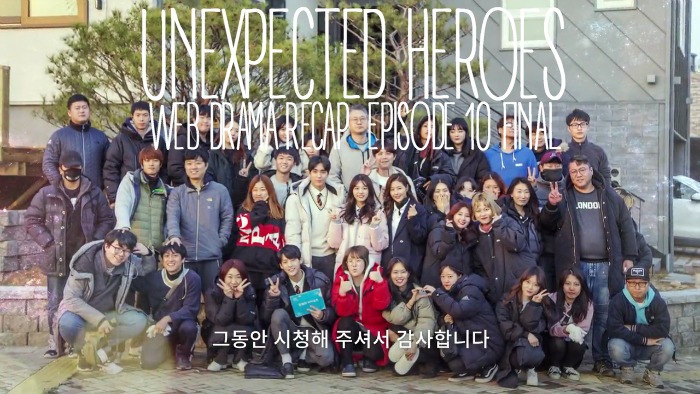 It is the last episode and I am so ready for the sister and this team of super heroes to get the justice that they deserve. Dr. Noh was in a pretty precarious situation at the end of the last episode, but all three super heroes where they so I’m sure one of them will save her. I believe in them.

OPENING
We start right where we left off. The super strong Soo-ho pushed the car as it charges and the cell phone crashes to the ground. Joon-hyung gets to Dr. Noh and asks if she is okay.

Cut to the uncle investigator. He says they didn’t have any CCTV footage around there. But Joon-young says they don’t’ need it because he knows who the person is, their librarian. Yoon-ji is distraught at this news and starts crying.

APARTMENT
Yoon-ji is still upset and is sitting on her bed. Soo-ho comes in with a hot drink and wonders why she is still crying. She says that it is all her fault because she told the librarian everything. He says it is not her fault and she shouldn’t think about nonsense like that. She should just sleep. She says she can’t sleep and he tells her that she is easily scared. he says he can stay there until she sleeps. he picks up a book and she lays down in bed and tries to sleep.

Meanwhile, in the doctor’s bedroom, Joon-hyung is tucking in Dr. Noh. She tells him not to think of her as a patient, but she also says that she is okay because of them. She is happy that Joon-hyung is still cheerful even though he has experienced something scary. He said it is because of his heart. He used to have a hard time with bullying and he never dating. he only thought of himself, but now he thinks about his friends and Dr. Noh and catching the criminal, it doesn’t bother him at all. he says they know who it is, so they will catch him soon.

He leaves and he sees Soo-ho and Yoon-ji asleep in the room (Yoon-ji in the bed and Soo-ho on the floor but curled onto the bed).

LIBRARY
The uncle is at the library and all the police officers are there as well. They are asking everyone questions and they also look on the computer. he had lots of pictures of a young man on the computer and of Dr. Noh’s apartment and her picture. The young man might be her brother.

Everyone in the library said they don’t know him well but he seemed like a good guy.

The school bell rings and Soo-ho runs off, his class must be far away. But Joon-young shows up and tells him that he wants to use his third wish. She can’t like Min Soo-ho or anyone.

Cut to them walking home with Soo-ho in the middle. It looks awkward between the three of them.

APARTMENT
Uncle is there (samchon). He checked the librarian’s ID and he found out that the real Kim Min-chul is missing so that is not the librarian’s real name. They don’t know what is going on or why he is sticking around them or why he wanted to kill Dr. Noh. He tells them that they need to be careful.

Yoon-ji remembers back to the janitor at the hotel and another suspicious person at another location. She says that he was around them all the time. And he has this tattoo of the flower.

The librarian is outside right now looking at their house and a creepy smile comes upon his face.

REAL TALK
Um, they can’t be serious with an ending like that right? I mean that really felt like the end of a season 1 show (like in the States) and if they don’t have a season 2 then that is just messed up. It is a pretty big cliffhanger and just begs for at least one more episode if not one more full season.

This episode was really building to something and I just knew they would catch the guy at the end, but now he is not only still at large, he is staring at them creepily as they sit in their apartment talking about him. Seriously, his smile was really creepy at the end and, um, why does he care so much about them in the first place? He got away with the murder already so what is his obsession with the sister? There are a lot of holes to close up in this drama and I kind of think it will be green lit for another season due to it’s popularity on Naver. Plus it will be fun to delve a little deeper into the teenagers super powers.

With how this drama went I’ll be happy to watch season 2, even with all of the glaringly obvious commercials and public service announcements. Seriously, they didn’t even try to hide them. I will give them a pass with that, but hopefully they try at least a little harder to hide them in season 2 (if there is a season 2, there will be though, right? RIGHT?)