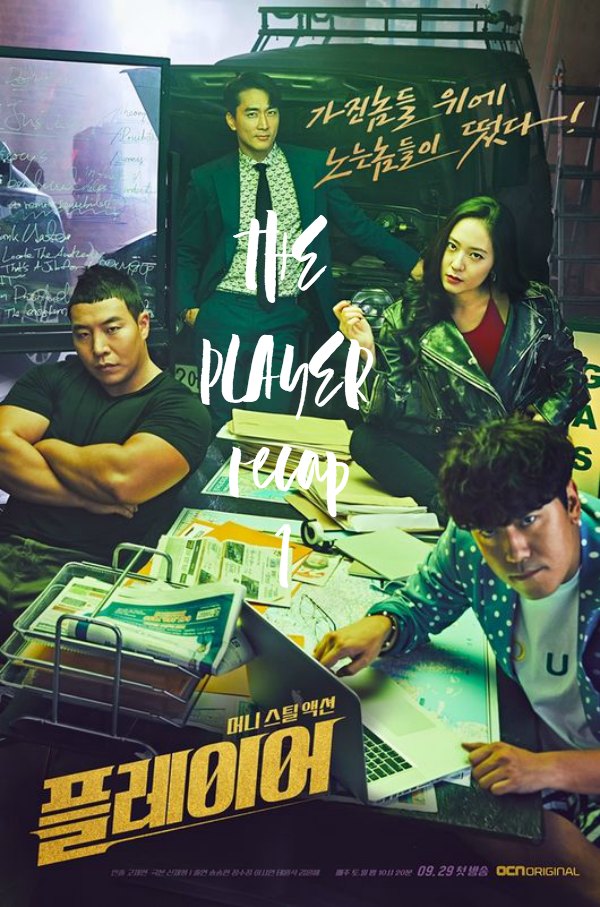 We are going to try and marathon The Player all day today! So look forward to as many quickcaps as we can get to throughout the day. If we get all the way to 4 then you know we are celebrating because that means we will be all caught up and ready to rock for next week!

So far I must say that I love it. Song Seung-heon is made for this type of role. Can he be the next Bond?

THE PLAYER KDRAMA RECAP EPISODE 1
OPENING
The player opens up rally slick showing a very nice view of Seoul and a huge Park that i don’t think I’ve ever seen before and then zooms in on Kang Ha-rin who is driving somewhere in a fancy car. He ends up going to a prison where inmates being given thier food in plastic containers. But one inmate is offered a delicacy of sushi. What is going on there?

Kang Ha-ri meets with this person where we find out that Ka-ri is taking out this inmates members who are still on the outside one by one. But he i sonly targeting that money laundering guy, no one else. The last one he is gunning for is a money launderer (or maybe a person who makes counterfeit money?). The prison guy told him where the counterfeit guy is. But the prison guy also warned the money laundry guy.

So the money laundry guy has a hilarious heads up as he tries to bumble his way (and all his moneys way) out of the building.

In a cameo by Yoo Seung-ho, we see a security guard just working for the money. Ha-ri pretends to be a security guard and tells him that he knows he is just there for a job but they are about to bust these guys. So, what will you do? You could go to jail for a few days or~. The cameo asks if he can just go now? Ha-ri tells him he can go because of his mom. Ha-ri smiles and the cameo takes off.

That’s when Ha-ri calls the prosecutors office and tells In-Kyu that he has something to report. The prosecutor sends all the men to Ha-ri.

Meanwhile, Ha-ri is still pretending to be a security guard, but now he is packing up all the money. The thugs show up and wonder what he is doing. But then the fighter comes in, Jin-woong, and takes them all out.

The prosecutors show up to an unconscious and crumbled gang while the swindlers take off with all the money. But the prosecutors yell to stop the swindlers in the parking lot, so it becomes a chase through the streets of Seoul as our swindlers are in a very noticeable black van and the police are on their tail. These fools are about to get caught.

But then A-ryeong shows up in her motorcycle and is able to stop all the cars at the light so that the team can get away.

This show has kind os a Quintin Tarantino feel to it. One part comedy and one part action. I like it.

Back at the prosecutors office, reports ask In-Kyu what his teams name is. He says, my team name is….but of course its dramatic so we have to see a slow motion walk out of the team with a job well done.

ONE MONTH AGO
Prosecutor In-Kyu looks at all the players on the board. First up is Jin-Woong. He is a fighter hitman who has never lost a one on one fight. And he is built like The Hulk.

Next up is Byung-min, he is hacker extraodinair and has won a lot of hacking competitions. There is a rumor that he was hired by NIS. He has God hands in this industry. But right before he was hired, he was working for some gangsters and went out of our radar.

Kang Ha-ri was always around whenever the big guy was arrested. But they don’t know who he is. They put all three on the screen , Fighter, Hacker, Swindler.

Cut to the three men in their hideout chilling. Their place is pretty fab too. Byung-min announces the next target in a very fun way. They start to talk about Charman Chun (the one they busted on month later). But they don’t want to take him out, they want someone else. Ha-rin throws a newspaper to them and asks, what about this chaebol? The other two are a bit worried about touching a chaebol. But Ha-ri talks them into it.

Jin-Woong asks who the driver will be. ha-ri smiles cavalierly and says he knows of one. Cut to A-ryeong driving in a driving test. But she is going so slow that a horse passes her. So many cars honk at her as she drives and one guy even yells at her car. A-ryeong asks him, you said I can drive the way I like? The driver says of course.

So A-ryeong takes off racing to that car that cursed her out, pulls a U-ie and parks it right in front of them. She is happy, but she asks him if she didn’t pass? (The driver is a known gay man who is very eminent) The driver says, ahhhh, you pas…I am not good with women…..ahh…).

A-ryeong leaves and grabs a tea. But then she sees a hot sports car and moseys on up to it. She tells herself that she won’t steal it (she is on parole), but the door is unlocked so she can’t help but sit inside. ha-ri shows up and tells her that she is all busted, he is going to call the cops. Unless….

He lets her drive the car off as they talk business on the way. But for some reason, the police start following them. A-ryeong asks why, she did not do anything wrong, so Ha-ri tells her well, this car is stolen. So A-ryeong has to show off her driving skills on the mean streets of Seoul.

Cut to Ha-ri about to throw up as he stumbles back to their hideout. ByungMin is practicing driving and yells that he is confident now. But Ha-ri just introduces A-ryeong to them all. She is the driver. She thinks they are a bunch of geeks in a nerd house. Of course they think she is the cats meow.

PROSECUTORS
there is a case (based on a real case) where an actress died because she was being used as a call girl in order to book jobs. In-Kyu is in the courts arguing the case. Her friend is on the witness stand telling her truth about what happened to her friend.

But the friend starts to lie and says that the girl said she was sick of her life and she wanted to seduce that guy and then kill herself. So the bad guy gets off. The mother is distraught. the bad guy bows to the prosecutor and arrogantly tells him (but in an innocent way), that following the law is this nice.

This ends up being bad for the prosecutor because the prosecutor is the only one trying to try this case for the mother. No one is on their side. Not even the other prosecutors.

Meanwhile, the bad guy drives home in his expensive suit and car and with a driver whom he takes for granted. This is the Swindlers next target. They want to target this guy in order to get to his father.

The father is meeting at a church on Sunday, which appears to be the favorite meeting place for all the bad guys. We also cut back to the son who is a pervert that only thinks about woman as objects. He looks a waitress up and down as she cleans something and then calls his mother to tell her that he will see her soon, I love you.

But, he tied that girl up from earlier and has her in his living room and puts a cell phone on her as he starts to play with her in whatever way he wants to. But she is able to break free, hits him with a gold club, and runs off. She is in a white apartment complex so she has to find a place to hide. She goes to the stairwell and calls the cops, but the pervert finds her there.

However, we cut to another man who has a timid call girl with him. Jin-woong shows up and B-slaps him into calling for the case file. (I’m not sure who this man is though).

Ah, it appears that the swindlers got the case file and are working on this case. They have the CCTV of the chaebol pulling the waitress into the hotel. They go to talk to the waitress, but the waitress cannot talk because she is in the hospital, so they talk to her mother who says it was a hit and run (?). They ask her if she has seen any strange person around.

Meanwhile, the chaebol pervert is worried that the girl is going to wake up. So he asked a guy to kill her. But the guy told him that she was in a vegetative state. However, the swindlers caught that guy on CCTV and the hacker got his account information. But the site that they find is an invite only site. So they have to try some passwords to get in. They try one and exclaim that THEY GOT IT. He is a simple guy like you!

On this site is the video recording of the chaebol and the waitress. But Byung-min quickly puts the computer away and says he thinks he has been followed? They all look around but ha-ri’s window get hit in with a bat or something, glass shoots into the van.

COMMENTS
Love this show with all my heart already. Song Seung-heon fits right into this swindler role as if it is the role he should always play. In fact, he might be a very good James Bond. I love the feel of this show too. It has a kind of Quentin Tarantino esque caper feel to it. It does not go that far into satire but it does have highly stylized characters, violence, profanity, and humor all blended up, poured into a buddha bowl, and decorated with just that right amount of coconut and blueberries to make it Instagram worthy. Me likey.