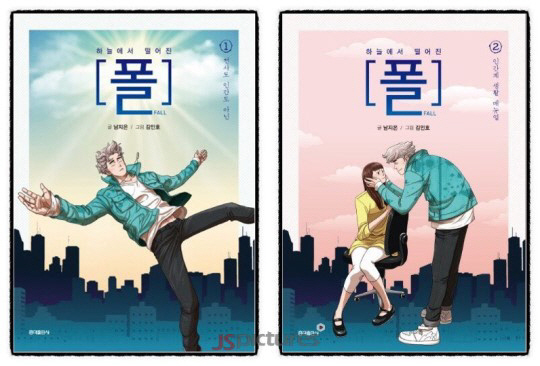 Well this came out of nowhere! Or at least it seems like it. The drama production company JS Pictures has picked up the production rights for the webcomic Paul from the Sky by Writer Kim In-ho and will begin production in August. The webcomic was first published in June 2016 and is crazy popular with a fan mania surrounding it. The webcomic has even had two books published, which is a huge deal.

The story line involves a fish-out-of-water story where Paul was punished in the heavenly world and fell to the ground. So, he’s basically an angel who fell from the sky. However, he is not a full angel, he is mixed, his father is a full angel and his Mother is a human. Because of this, Paul does not have the full strength of angels and will struggle against evil spirits who plague the world.

But, what is a drama without its leading lady? On the human world Paul has a fateful encounter with a human girl who can see angels and demons named Seo-hee; he becomes her guardian angel after she saves his life. Together, they battle demons and fall in love.

This story is said to contain angels, archangels, demons (are those the same as archangels…I’m confused) and a strong mythological world. The production is not messing around having already secured their director, writer, actors, and a spot on tvN. Whew. The director attached is Kim Sang-Ho who also directed Man to Man, Arang and the Magistrate, When a Man Loves, and Can You Hear My Heart. Yoon Hyun-min and An Woo-yeon have signed on to star.

Well, after the crazy success of Goblin I am not surprised that others want to capitalize on that craziness and hell-to-the-yeah I am along for this ride. I love fantastical “mixed kid” storylines and fantasy come reality, especially if it has that real and magical feeling to it that Goblin had. I know, I shouldn’t compare it to Goblin, I’m just saying…