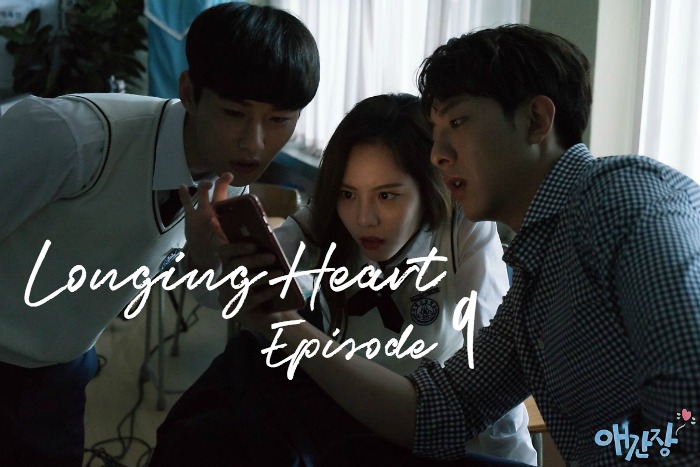 The truth is finally out in the open in Longing Heart. I feel like we have been building to this episode the entire show. I also feel kind of stupid because I should have guessed that this is what would happen, the writer left more than enough clues to put it all together. *Face Palm*

OPENING
JS tells SW that he knows it now, she was the one that should be on the ship. He should never forgive her and hate her forevermore. She will remember it forever as well. She leaves SW crying and JS is also crying as she walks away.

But after a while she couldn’t walk anymore; she stops and cries on the ground.

SW goes home in unbelief and sits at his desk. He pulls out his book with the note and looks at it.

CLASSROOM
SW is teaching in class and gets a phone call from ySW. He is about to get discharged from the hospital, JS is there as well, but he hasn’t had a chance to talk to her. She is very busy now, she only stays in the emergency room and doesn’t even stop to eat.

SW goes to the teacher’s lounge and sees a commotion by his desk. His superstar friend Gun-deok is there and all the students have crowded around him. SW has his students go back to work and talks to his friends outside. They sit and watch the kids playing and SW talks about how he was so happy to sit here and watch his friends.

SW tells GD that he used to like JS. He smiles and says that he has to go back to class, but his friend can chill and look around if he wants to.

Meanwhile, JS is packing up her things at her desk. She has her book, her most precious book, but she is packing it up also.

CLASSROOM
GD goes back inside and looks at NH teaching. He meets her outside and asks her who she is dating (because of the hairpin she gave him). She jokingly asks him who he is dating. Then she slyly agrees to go on a date with him and GD gets crazy happy.

HOME
SW and ySW talk to each other and ySW decided to go home. But before that happens, SW treats ySW to some drinks. ySW wants to know how SW learned how to drink, cut to his drunk sister coming in. She tells ySW that he should learn how to drink from Soju, not from beer! SW tells ySW that when he is 20, he will wake up thinking that he will want to die.

The conversation goes back to JS. ySW said that JS told him that she likes SW, so ySW decided to go back to his present. He then says that he is envious of SW because he is JS’s first love and JS likes him now, not ySW. ySW never heard the words, “I like you.”

SW tells him, there are some things that it is better not to hear, that way it will hurt less. When you become an adult, you will know.

BEDTIME
They go to bed and sleep together. But they argue as to how each person should sleep. Then they stop arguing and talk about going to college, is it fun? No. Is it fun becoming an adult? No. But it feels good making your own money right? No. ySW tells him that he should at least lie to give him some hope. he asks what fun SW had in his life, no fun?

SW – Today, tomorrow, or the next day, or the day after that, I hope to just see her again.

ySW says he knows, he knows everything. When he goes back, he will see JS after ten years. SW tells him that he at least has hope to see her after ten years. That can be a happy ending that he doesn’t even know about. ySW tells his older self that he was happy to see him because that meant that he will become a nice adult. SW tells ySW that he is sorry that he keeps telling him lies, he wants to leave the truth for the future for when ySW becomes an adult and can handle it. Then he tucks ySW in and tells him that he did a good job.

HOSPITAL
The wannabe fiance is talking to someone on the phone about using a coupon when ySW comes in. He says that he is his patient. Then we see ySW run to JS who is about to check the messages on her phone. He turns it off and tells her that he wants to hang out with her for one day because today is his last day.

Montage of their amazing day reading books and resting on each others backs…going to a cartoon cafe and drawing….walking along a promenade….

Then ySW gives her a sudden very big hug and thanks her. JS also thanks him. When she was with him, she felt like she was going back in time. She gives him her umbrella as a goodbye present. She says it will rain tonight, just like it was the last time she saw her friend. For the last 10 years, her friend is always wet in her memory and it hurts her mind.

ySW wishes that JS doesn’t get hurt anymore and gives her a cell phone. He tells her to turn it on right away.

CAFE
SW meets with the fiance. SW wants the fiance to let JS leave the island. He doesn’t want her to see him anymore. The fiance is all like, why? This makes no sense. He wants to know what happened between him and JS. Did he team up with ySW? He also told him the same thing.

JS turns on the phone and ySW has left her a text saying that he would tell her his name…his name is Kang Shin-woo. She turns her head back as if looking for him.

Then we have a flashback of the night JS told SW everything that happened. ySW was there as well, he just didn’t tell everyone that he was there.

ONE MONTH LATER
SW wakes up and thinks that he doesn’t want to go to school. his sister tells him that he should if he wants to make a living. he looks up and he has two pillows, he thinks it has become his habit. he goes to the bathroom and all of ySW’s stuff is still all around.

He goes to breakfast and his sister yells at him, it is only the two of them there! But SW tells her that they used to have that boy with them. SH thinks, oh yeah, that’s right.

SW goes to the teachers’ lounge and messes with NH, is she dating? But she just covers the screen. She asks him if he is dating and he smiles.

2007
ySW is in front of a computer. He looks at his cell phone. He got a voicemail and thinks that it is spam. Then he starts to send an email to himself who is alone in the fall. He says that DG and NH noona have something going on.

SW is getting all of these emails and he looks at NH and wonders if that heart she saw was from Beun-duk? Ewww, he shouldn’t have seen it.

We see a split screen of 2017 and 2007 of the two SW’s walking down the hallway. We know that ySW wants to know how SW is doing and he doesn’t want SW to lie to him. He knows SW isn’t okay because ySW isn’t okay.

JS
We find out that JS is leaving without a goodbye party. She is just leaving. JS wants to go to America because her parents are there. She might just go there forever. The fiance is also going to America, so it looks like there are going there forever. he hugs her and apologizes for bringing her to this town.

JS then goes to Sora to say goodbye. SR is happy to see her but sad when JS says that she is going to leave. JS wanted to be sure that she told her this time. She is going to America and SW doesn’t know.

Flashback of SR saying that she doesn’t want to see JS ever again. But then ySW comes up and says that she told him to meet at the bridge and he knows what she wants to say. So don’t be too mean to her. Just think that she has her own reasons.

SORA AND MIN SEOK
Sora is thinking hard, she is at home and she decides to call JS to tell him.

We have a back and forth moment between ySW talking to SW by writing him letters. SW reads the writing in real time as ySW writes it. He is writing about fate and how fate is something that you can’t fix. At the end, ySW says that he is sorry, but he is going to change his future. he is not going to see JS in Seoul ten years later.