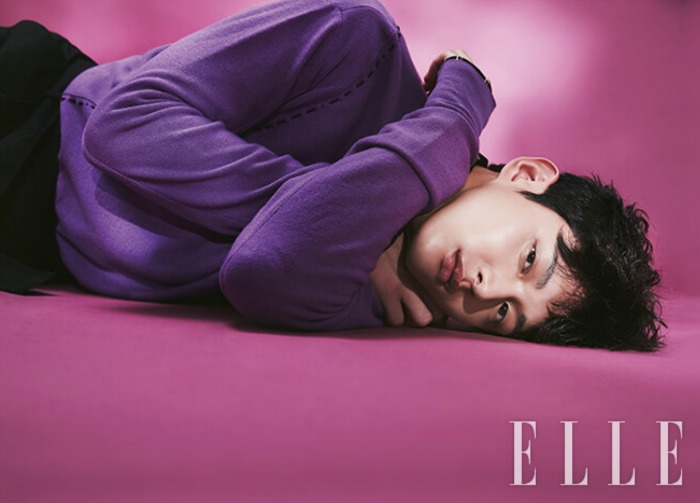 Also, if you follow us on twitter then you know that we made a long trip yesterday and came back with some gorgeous Korean magazines. I read them all the way back home and I’m pretty excited to share them with you all here on Bah+Doo. We are actually starting to collect quite a few magazines over here, so we are thinking of opening up a shop on Bah+Doo to sell them, which could also help us buy new ones to share. It’s a beautiful cycle.

Back to the interview. First off, I knew Lee Seo-won was young, but I did not know he was only 20 years old. Y’all, he is a baby, literally (well not literally, but you know). He definitely has a bright career ahead of him because he can look wide-eyed or mature depending on how he is styled. He was able to pull off two characters seamlessly in Last Minute Romance to the point were I was starting to really think they were two different characters and not a person playing two characters. I love it when actors can do that to me. He is the current host of Music Bank and he is also in the same agency as Song Joong-ki and Park Bo-gum (Blossom Entertainment), so I expect great things in the future for him. I’m actually looking forward to his next drama, perhaps another leading role? The full interview is below, enjoy. 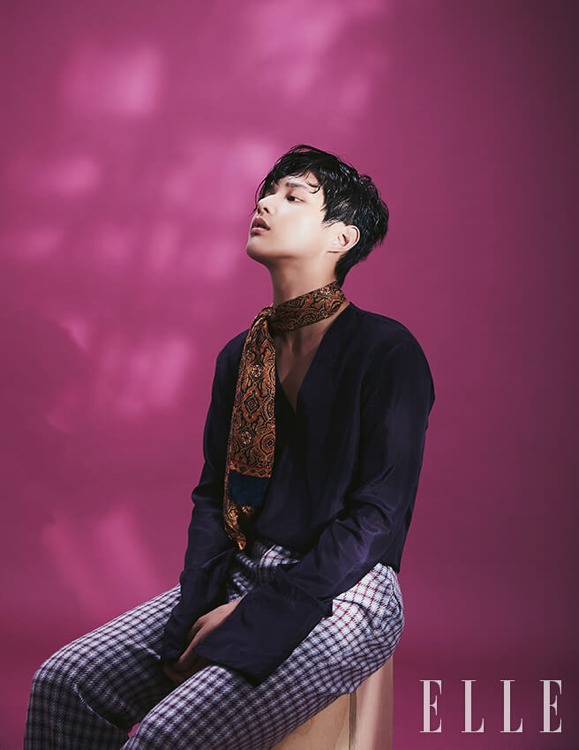 Lee Seo-won is not afraid of the word “First.” Unaffected thrill and curiosity are spread on his face like a sunset glow, which will face infinitely many first moments.

Aren’t you in the middle of filming the drama Hospital Ship? I am almost like living in Geojedo for filming. If I count the days I stayed in Geoje it is about 3 weeks. I got a good tan.

Do you like the sea? I like all nature. Sea, forest, sky, even plants in between city buildings.

Do you like the sky the most? I saw a lot of sky pictures on your Instagram. I don’t quite remember which book it was but I read this sentence when I was little. “People only look at the ground, so why complain when they got hit by something from the sky?” Since then I look at the sky when I walk. I trip a lot. Haha. The more I look at the sky, the more I find a variety of beauty.

What kind of sky are you particularly attracted to? I like sunrise and sunset the most. I like the light flux through the clouds right before it rains. It’s so pretty.

It would have been luxurious for your eyes in Geojedo since you can see the sky and the sea at the same time. Of course. The sea is something you have to plan to see for someone like me living in Seoul.

What was your first impression toward Hospital Ship? The topic was foreign and fresh to me since it is a medical drama on a ship setting. The drama is about the doctors who visit remote island towns in a hospital ship. The writer constructed a fictional story based on a true story after she heard that hospital ships actually exist.

Your character in the drama is Korean Medicine Doctor Kim Jae-gul on the hospital ship. When you think about him, does it make your head complicated? The outline of the character was already done. I interviewed Korean Medicine Doctors, watched documentaries, researched related books. I am trying to put additional content in that outline.

Apart from his job, what kind of person is Kim Jae-gul? He is a lonely character. He was born in a doctor family, but he didn’t follow his father’s request to become a surgeon, instead, he became a Korean Internal Medicine doctor. Therefore, he didn’t get love from his family and he did not get the recognition from who he wants to get recognized from the most. Because of his family background, Jae-gul doesn’t like to share his affection with others. However, he is longing for love inside.

It is similar to your previous project. In The Liar and His Lover, you were a bassist from a classical music family. They are both in similar situations and completely alone. That helped me to understand Jae-gul.

Your previous project was your first main role. What meaning do you want to have with Hospital Ship to you? Whatever project I am doing, “The first” still has a lot of meaning to me. I debuted with Awl as a child actor and I was a supporting actor in Uncontrollably Fond. I had my first adult and main role in The Liar and His Lover, and it was my first role as an artist. And I will play a double role in a web drama Last Minute Romance which will premier in October. In Hospital Ship, it was the first main role on terrestrial TV, the first role as a doctor, and the first time playing someone in his 30s. Three first things! Ah, also the first time shooting on a ship as well.

The first is not that much of a burden for you though. I am more thankful for letting me have these chances than feel like a burden. I have to work hard to repay for the trust they gave me, so I shouldn’t be scared of it.

What will you say for “Lee Seo-won is this kind of person” in one line? I am a curious person and I have to know what I am curious about. Also, I don’t want to show to others whatever I am not good at. For example, if I am learning dance moves, I don’t want to show my practice to others. I am not a perfectionist, but I really hate to be embarrassed.

Is that so? What kind of kid were you? I was very timid.

It is hard to imagine that when I look at you now. My father was in the military, so we had to move a lot. Because of I was a timid kid, it took me a long time to make friends. When I finally became friend with other kids, we had to move. I thought if I don’t change myself, I would live like this forever. So I tried to change myself by talking to others first and play together.

When did you realize that? I was in 2nd or 3rd grade.

Then how did you start acting? When I decided to change my personality, I came up with a lot of things to do. When I filled out my future job section, I had so many jobs I wanted to write down. I thought I don’t think I can’t experience all the jobs I want to do. Then I realized that I can be an actor to experience many different jobs. That was the beginning of my dream.

You said this in a past interview. “I think I am living in someone else’s dream. I shouldn’t taint someone’s dream since I am living their dream.” What does it mean? Participating in interviews, pictorials, and dramas are the dream and goal for someone who wants to be an actor or a fashion model. So I want to work hard and improve myself because if I become sloppy or cocky, I feel like I destroy their dreams. On the other hand, I become an artist or a doctor in my acting. So, I try hard to faithfully act in order to not be offensive to those people with the jobs. I carefully research about their behavior and habits in order to act realistically.

Exactly one year ago, what kind of dream did you have? Uncontrollably Fond was airing at that time and I thought I wanted to have a main role next year. Then I wanted to be in a lot of projects to show myself on-screen more, even if I don’t have the main role.

If so, you already accomplished your dream. Chances came fast unexpectedly. However, I still want to be in many projects. I still have a lot to show.

What kind of jobs/occupations do you want to experience while acting? I want to do everything since my filmography is short, I just came up with a Formula 1 racecar driver. I wonder what it feels like to drive so fast and feel the machine’s vibrations with your entire body.

Sounds fun. What else do you have in mind? I want to know how thrilling it is for hunters when they aim at an object and slowly pull the trigger or how prosecutors and lawyers feel when they are in a courtroom.

Have you thought about these things? I haven’t tried it yet, but I want to try something difficult to play. I think love scenes will be difficult. I imagined it but I have no experience, therefore, I will have to think a lot before filming.

Do you know that you are the new hero for the “Boyfriend pics?” Haha, I saw it. The word “Boyfriend pics” was one of the search keywords related to my name. I looked at it while thinking what is this? People put that word on my pictures on Instagram. I should ask my sister to take more pictures.

I also saw the nickname “Friday boyfriend.” I am the current Music Bank MC which airs on every Friday. It is my only regular job of the week. Every Friday, I automatically go to work while thinking ‘Let’s go to work again today.’

Do you have a plan for “I am going to be this kind of actor?” When time passes, I will have hubae actors. I want to be a helpful actor for them for a long time.

I don’t know which one, but you will have your life’s work some time. I want to have my life’s work in each genre. Action, comedy, romance, thriller etc. one per each genre. If I make a life’s work every 10 years, it will take about 80 years. 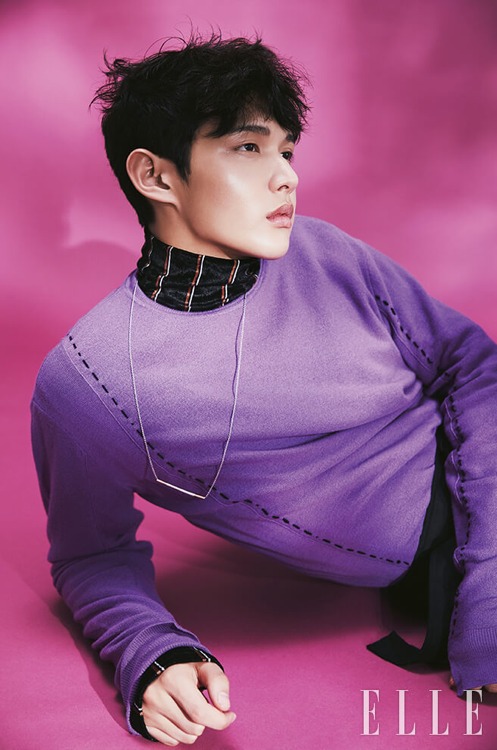