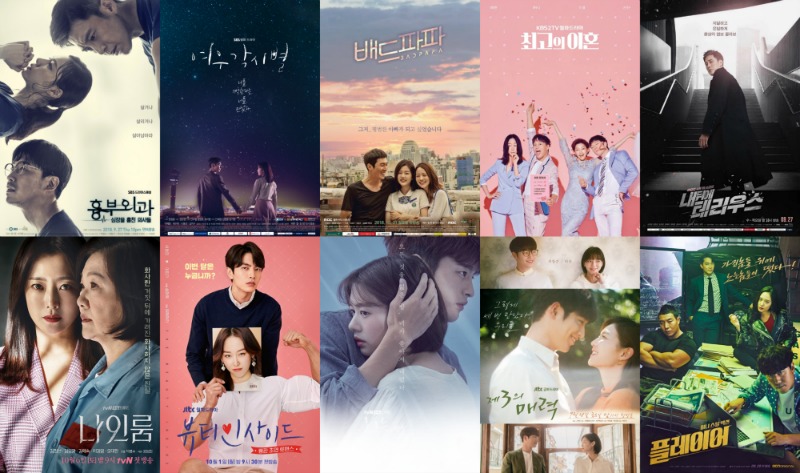 Wow, y’all, just wow. There are so many shows premiering at the end of this month and the beginning of October that it is just cray. Hopefully this new show lolapalooza can settle itself down during the next batch of premiers because a girl needs a chance to take a breath, amirite?

The last time this happened (July) we were not on top of things and let two shows slip through the cracks that we really wanted to cover (Your Honor and Time) and one show (Life) that we got started super late on and ended up dropping due to being hours behind. This time, we are on top of things. Whether we will stay on top of things or not is still up in the air. All shows mentioned above are explained below. Let’s get this premierapalooza started!

PREMIERING KOREAN DRAMAS (that we plan on covering!)
TERIUS BEHIND ME (September 27th)

Terius Behind Me is an action comedy starring So Ji-sub and Jung In-sun. So Ji-sub plays Kim Bon, a legendary NIS agent. However, all that secret agent mess caught up to him three years ago when an assignment went wrong and the woman he loved died. Because of that, he retreated from the world and decided to live alone and quietly in an apartment complex. But of course, he cant help but help out his neighbor Go Ae-rin (played by Jung In-sun) uncover a mystery involving her husband. Son Ho-Jun and Im Se-Mi also star in this swashbuckling action-comedy that will hopefully have us all keeling over with laughter. But it’s a Kdrama so you know they might stab us in the eyes. I’m watching for the leads So Ji-sub, because it’s So Ji-sub, and Jung In-sun, because I loved her in Waikiki Guest House. Also, we are co-hosting a premiere watchalong tweetfest with The KThree and DramaCurrent on this one! Watch with us on Thursday!

My most anticipated show of the lot. The Third Charm stars Seo Kang-joon as a nerdy nerd who nerds and Esom as the delightfully firey hairdresser he falls in love (and gets a perm) with. The couple go from adorable to chic as we watch their love blossom and change through three independent stages of their coupledom: Spring when they are 21, Summer when they are 27, and Fall/Winter when they are 32. This is a straight romance brought to us by JTBC so we know this show is going to be high quality. Whether it will have a crazy mother-in-law or depressing ending is still up in the air, but I am happy to take this balloon ride.

The Player should be all sorts of heist fun with a quartet of heisters starring Song Seung-heon, Krystal, Lee Si-un, and Tae Won-seok. The trailers are full of boast, bravado, and beauty that is not restricted to the people involved. They have a lot of pretty things they are stealing, driving, wearing, it is a beauty fest wrapped in candy coated diamonds. I am not watching this one for the acting, this show is all about posing, posturing, car chasing, and criminals. But just because the acting may or may not be amazing doesn’t mean this show won’t be. OCN always produces a high quality drama (romances aside); I don’t expect them to stop now.

I was not looking at Where Stars Land (aka Fox Bride Star) all that much, until I found out that it involved super powers of some kind. SIGN ME UP, YO. That little aspect, including the actors involved, changed everything for me. The actors bringing this story to life (and hopefully also grounding it in reality) are Chae Soo-bin and Lee Je-Hoon, who are both excellent at their craft. There is not a lot released about this show yet, all we know is that there is an airport employee who keeps to himself and a woman who grows curious about him. The trailers are delightfully playful and coupled with whimsy which is all I need to tune in to episode one.

THE BEAUTY INSIDE (October 1st)

The Beauty Inside is a television adaptation from the movie of the same name where a person has to accept that their lover changes into another person, literally, one week a month. The movie to TV adaptation alone brings hesitation with me for this show, but I am going in with an open mind because I did not see the movie. The drama also has one big change in it which is that the person who changes is the woman this time, not the man. Though that also highlights that this week long change could be coupled with her period every month (not saying they are going to do that, but it’s right there). Which can bring all sorts of hilarity or cringes depending on if it is done well. They might skip over that all together though. One thing this show could have in spades are its cameos which is a big reason I want to watch. Can you imagine all the amazing cameos this show can bring? Sign me up. Starring: Seo Hyun-jin and Lee Min-ki.

THE SMILE HAS LEFT YOUR EYES (October 3rd)

The Smile Has Left Your Eyes is a remake of a Japanese dorama called One Hundred Million Stars From the Sky. It is about a detective (Park Sung-Woong) that becomes obsessed with a female student murder case that was initially classified as a suicide. This detective has a little sister (Jung So-Min) who loves a certain man (Seo In-Guk) that she probably should not love. He tries to keep her from seeing him and also starts to believe that this man might be involved in the murder case he is obsessed with. Y’all, I don’t even know why I am going to watch this show because it has misery written all over it. But, I will keep an open mind and at least try and watch it for the actors involved and the gorgeousness of all the images released.

If you thought that Korean drama’s had a lot of heart, you haven’t seen nothing yet. This drama is all about hearts, heart surgeons, heart surgeries, saving hearts, losing hearts, loving hearts, hearts, hearts, hearts. At it’s core is a doctor in his fellowship who needs a heart for his mother, a superior who holds ultimate authority over him, and a woman who came back from the dead (literally? Zombie heart?) who joins the hospital as a resident. This one is a pass for me, but it might look interesting for people who are into lots of open chest surgeries. It stars Ko Soo, Uhm Ki-joon, and Seo Ji-hye.

Bad Papa, sigh, that name. If this were a movie from the 80’s then I feel like the catchline would be “Jang Hyuk is – Bad Papa!” because it appears that Jang Hyuk‘s name recognition, star power, and fighting ability is what is going to sell this show. At it’s heart, it is a show about a man who wants to be a good papa. But, in order to be a good papa, he has to become a Bad Papa!. Which means that he has to pick himself up from his once famous boxing bootstrings and use his fighting knowhow to reinvent himself as a Mixed Martial Artist in the UFC (or another cage related fighting ring). It is well known that Jang Hyuk is a devoted Jeet Kune Do practitioner, so every episode will most likely be dripping with action. I am kind of interested in tuning into this one to see how the MMA aspect will fit in.

Body switching, ahoy! In Room No. 9 the females of the species take control. In this show, Kim Hee-Seon plays a ruthless lawyer (Slitherin, through and through) who goes to meet an inmate on death row (also Slitherin, natch) who is played by Kim Hae-Sook. During this meeting, weird things probably happen because their bodies switch. So now the lawyer is in prison and the inmate is out, 20 years younger, and ready to slay. Just watching the aftereffects of this 50-60 year killer turning into a 40 year old vixen is enough for me.

If The Best Divorce (aka Matrimonial Chaos) was on the weekend, then we would most likely be covering it. In this drama Cha Tae-Hyun stars as a man who graduated from a prestigious university, but gave everything up to follow his dream of becoming a musician. After years and years go by without a big break, he tries to get a job but has no credentials and has to work for a security company. He meets Bae Doo-na while working there, falls in love, gets married, lives as a married couple for 3 years, then asks for a divorce. He thinks they have nothing in common. But then another married couple appear (Lee El and Son Seok-koo) and one of them (Lee El) is Cha Tae-hyun’s first love. I would watch this for Bae Doo-na alone.

Do you plan on picking up any of these shows? If so then let us know which one!