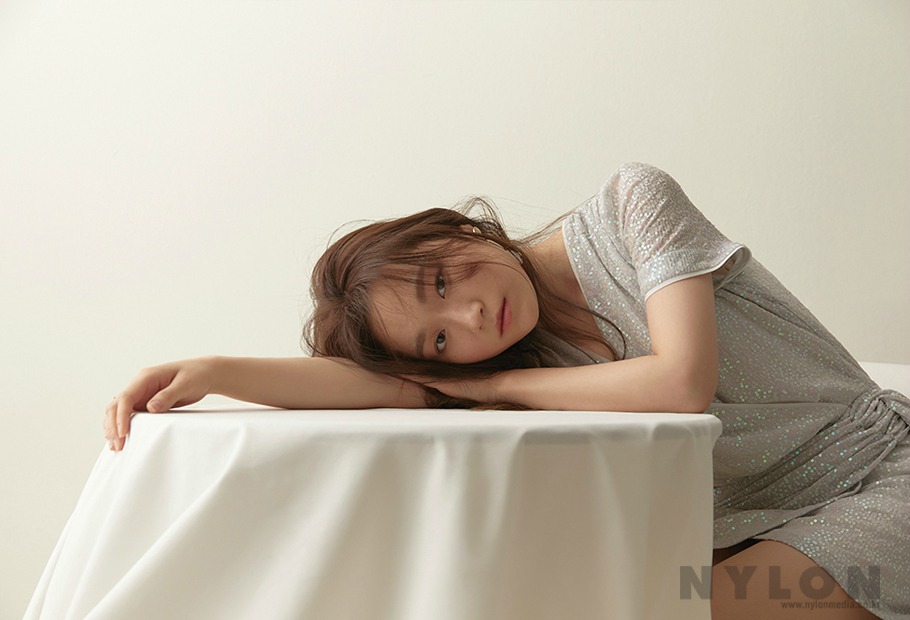 Kim Seulgi 김슬기 has several Nylon interviews and this one is the most recent. It happened this past summer 2017 and was probably done to help promote her role in the drama The Guardians (which I haven’t seen yet, but I heard it was gooooood). I have no earthly idea why they titled it Widows Cruse though. That just makes no sense to me. Perhaps it has to do with the concept or her drama? I don’t know.

In other news, we are going to try and live recap Go Back Spouses on Fridays and Saturdays. No promises that we will do it every episode, but we will try. It looks like a pretty fun drama so if you’re watching that one then come party with us over here! 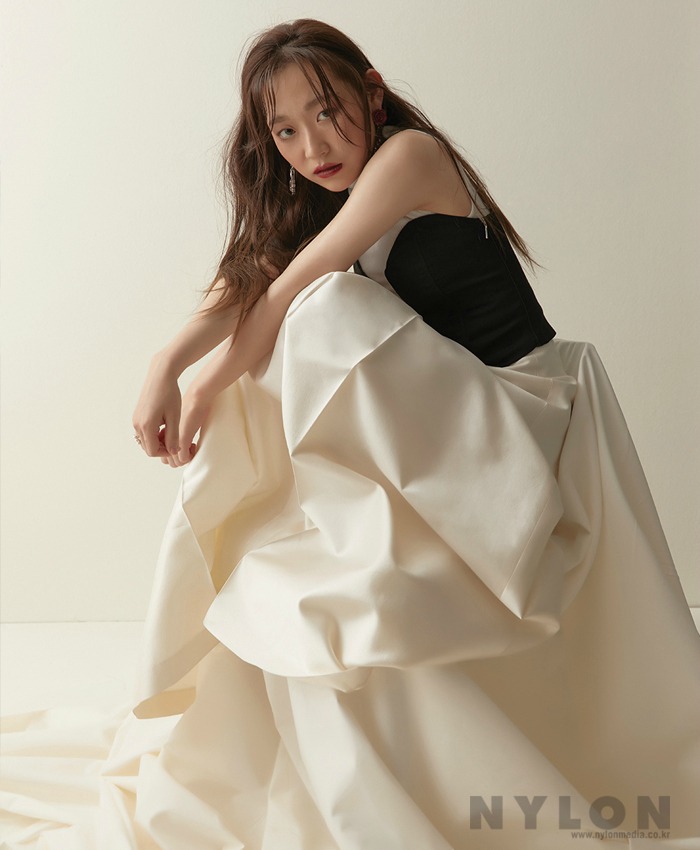 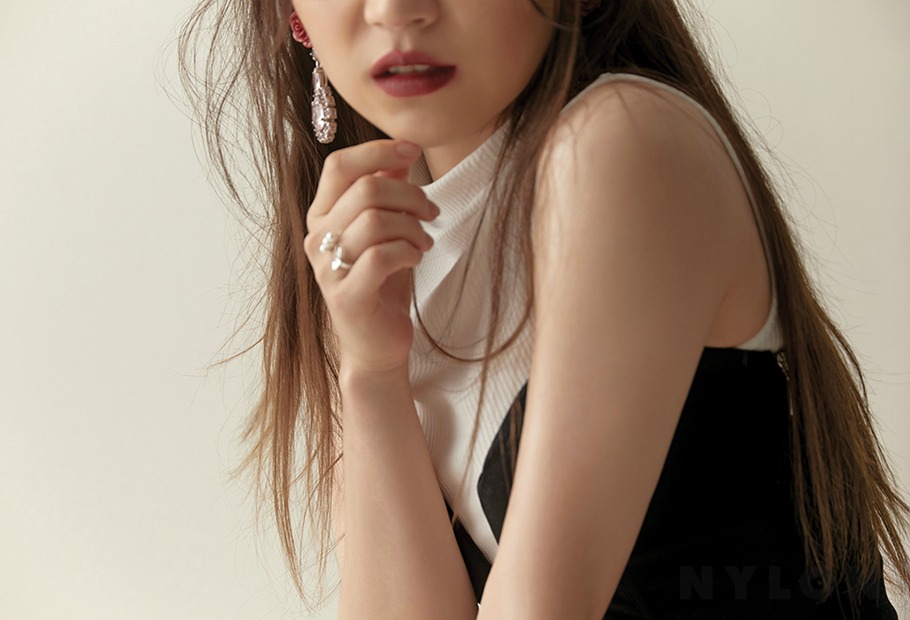 Kim Seol-gi is good at everything, including dancing, singing, even cooking. Of course, she is the best at acting.

I am your long-time fan. I think you can adapt to any kind of part, so I decided to do today’s photo shoot focused on your facial expressions. How was it?
It has been a while since I had a photo shoot for a magazine. It was especially fun to match the concepts.

Which one did you like the most?
I actually liked and enjoyed the “lethargic” theme the most. I like loose clothes as well. That is why I like pants more than skirts. I think I like to do nothing and relax.

You’ve played unique characters a lot. You also have many exaggerated acting roles (or exaggerated facial expression roles).
Maybe that is why I don’t want to do anything (when not acting). I think I had an interview/pictorial with Nylon previously, right?

Recently the MBC drama Queen of the Ring ended, which you were the lead female character, Mo Nan-hee. It received favorable responses; were you also satisfied with the result?
I am very thankful that the audience liked it more than we expected. In the drama, Mo Nan-hee is an “ugly” girl character. But a lot of the viewers said, “Don’t play an ugly girl character. It doesn’t match.”

You didn’t look ugly at all in the drama.
Because of the concept of the character, I tried hard (to be seen as an ugly girl). I didn’t wear tight clothes which show my body line and put a thick blanket around my waist. I also curled my hair to create more contrasting images against the “pretty” friend. I thought about this as well. What if I acted as the “pretty” friend character, what would be the viewers’ response? I guess it could have been something like ‘You are not ready for the pretty girl role?’ I think since I did the ugly role, I heard more people saying I was pretty. I thought ‘Of course, people become higher when he/she is in low position.’ (laughs)

You are busy shooting an MBC drama The Guardians. What kind of role is it?
I am a ‘hikikomori (abnormal avoidance of social contact)’ character who stays in her room all the time due to a past emotional injury. She is full of wariness and is scabrous but cute. She is really a character that stays in her room, so I am growing out my hair. It is also more comfortable as well.

I don’t believe you took that role just because it was comfortable.
I think I can show different sides of myself, a departure from the usual ‘witty-playful’ characters I played previously. My facial expressions and acting show her inner darkness, scabrous behavior, and vulnerability.

People mostly remember you as the characters you played in tvN’s SNL. Personally, I remember you as the character ‘Yoon Sol’ in Discovery of Love. Which character is most similar to the real you?
I resemble the shrewd and bright character Shin Soon-ae in tvN’s Oh My Ghostess, the charming and attractive, and ingenious beauty of Yoon Sol, and also the normal college girl like Mo Nan-hee in Queen of the Ring. I think I am the closest to the ‘Yoon Sol’ character.

Are you insensitive to the word ‘cute’ since you hear it so often?
No, not at all. I still like to be called cute until no one says it anymore. I think it is a complement to hear “You are like something/someone (or you remind me of someone/something)” for an actor. It means they can feel the image of you.

You debuted with the play Return to Hamlet in 2011. How do you feel when you act these days? Since some time has passed, are you feeling more comfortable?
At the beginning, everything was hard. Adapting to the entertainment industry was hard as well. I think I am a little more familiar with it now.

Yet, you still hit mountain after mountain…
True. Without exceptions. Trying a new character is always a challenge and a task.

However, I think you enjoyed those challenges. In fact, you played many different characters.
Not at all. I don’t like to make an effort. I am a lazy person. It is kind of a big surprise for me that I did all those previous projects, I want to praise myself. I don’t think time passing makes a hard work become any easier. Just learning how to endure them one after another. I think when you have a higher position, you earn something but at the same time, you lose something as well. Therefore, I try not to be in ‘a higher position (or fame), rather I try to study and absorb the pros and cons where I am at now. Of course, moving to a higher position is always a thankful thing, but I guess an arduous job will be waiting for me.

The country was loud with politics and we had an early presidential election. I wonder, what is your political opinion as a 27-year-old woman with a job as an actress?
It is difficult. I don’t even have a clear definition of “Which leader is a good leader.” There is a lot of pressure to cast your vote, but I think it is more dangerous to vote with immature ideas. Therefore, I called around for advice to those who are interested in politics with firm principles. I kind of summarized all the advice and made my final decision. I tried my best, but of course, I will study more in that aspect.

I just saw your contact name in your manager’s cell phone and it was ‘Su-boon yi’. Is it a nickname?
Ah, it was my nickname by one of my manager’s friends. It means I will receive lots of love because I am well-rounded for instance I can sing, dance, and act.

What can’t you do?
Studying. I can’t sit still.

If you didn’t act, what do you think you are doing?
Singer or small business owner. I want to open a chain restaurant like Kimbap Paradise while watching a tv show [Youn’s Kitchen]. 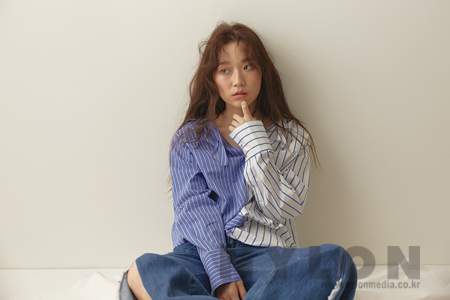 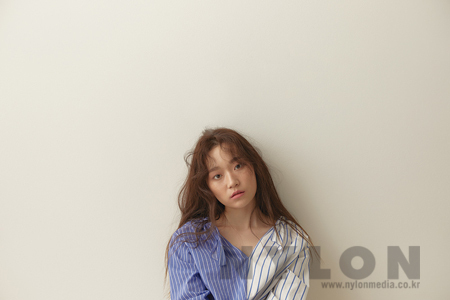 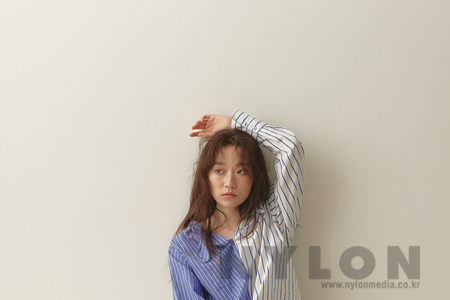 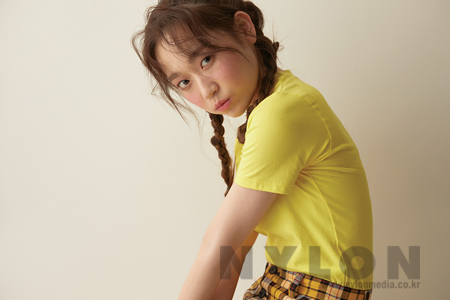 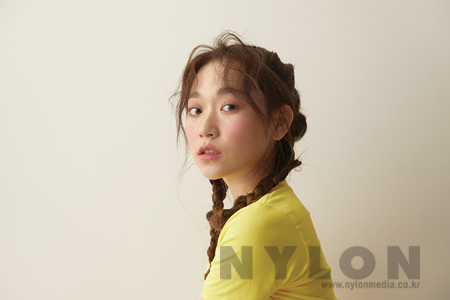 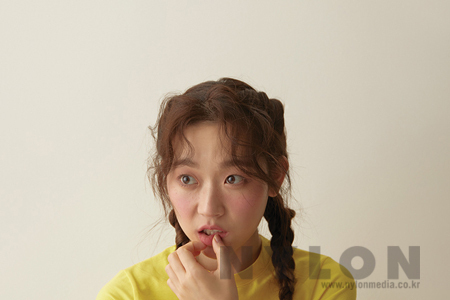 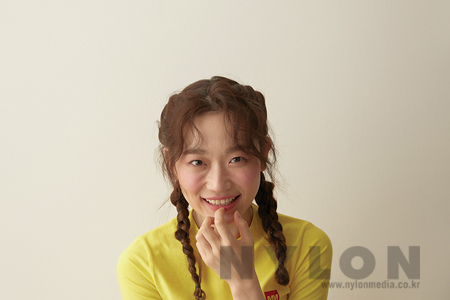 2 // The striped shirt is from O’2nd, the denim pants with a unique cut are from SJYP

3 // Sleeveless tops and bustiers are all from Zara, the dramatic silhouette Maxi skirt is from Deb, the pearl ring is from Edel Frau, and the rose earrings are from the stylist’s collection.