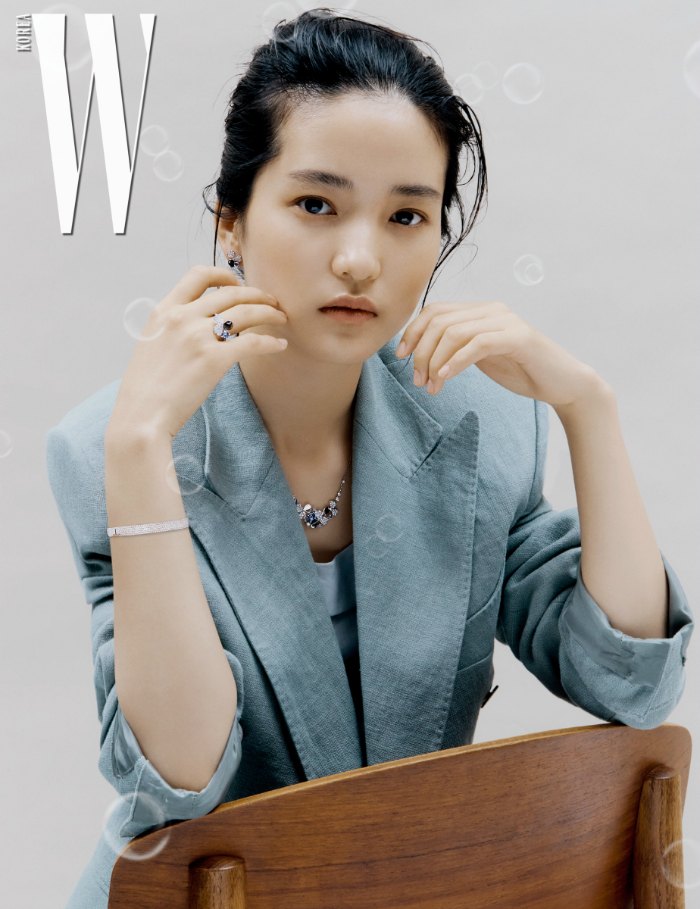 Kim Tae-ri (김태리), fresh off her hit Mr. Sunshine, has blessed us with a W Korea spread complete with four different ways to hold a glass cup. I have spent the better part of 30 hours watching her in Mr. Sunshine and, though Mr. Sunshine is not my jam, I can’t really say anything disparaging about her, the cast, the cinematography, set design, costumes, or the overall storyline. Everything is done to an exceptional degree. They are inconsistent on some historical things, but I will let that pass because I am not an expert myself.

Editing is probably the one aspect of Mr. Sunshine that could have been kicked up a notch by cutting out a lot of middling scenes and long desperate stares. Though that would cut out most of Kim Tae-ri (and everyone else’s) part in that drama, so there’s that.

But Kim Tae-ri’s overall performance (ie. the longing stares, pensive stares, high dudgeon stares, bougie stares, forlorn stares, woebegone stares, and occasionally delighted stares) was thoroughly convincing to me. I never bought the love story with her and Eugene, but I wasn’t irritated by it either. Kind of like when your friend likes someone and you cannot for the life of you understand why or really wrap your head around it at all but accept that they are together….it’s like that.

This W Korea interview is more of an opinion and observation piece by the writer, Kwon Eung-kyung, that has the potential to really mess up the perception of the interviewee if the writer does not like the subject (i.e. actor, model, musician, artist, etc) they are covering. That is not the case here as Kim Tae-ri is given more of a mystical appearance if anything. For instance, there is a lot of flowery language describing gestures and guessing at what Kim Tae-ri might be feeling instead of a direct question and answer. I think that might just be W’s style though. They are more of a storytelling magazine that can be lovely if you want to be swept away into the magic of words so long as the words make sense. Unfortunately, we had to sift through all the smoke to make any sense out of this interview. But I will give you a bit of a taste of what is going on.

“I think I should not be at the shooting site without a plan. I am working right? So I have to prepare well and also think about possible answers to questions. I don’t know exactly, but people might have an impression that I am a well centered person because of that.”

At the beginning of the article the writer mentions that Kim Tae-ri is showcasing Tiffany & Co. “Tiffany shows the top of the most refined beauty of women…Kim tae-ri’s face fits the collection the best and is the reason why she had to be a shining star.” The writer goes on to say that Kim Tae-ri went to a famous JTBC news program with the top newscaster of the country (Son Suk-ki who broke the presidential scandal). At the end of the interview Son Suk-ki told Kim Tae-ri that she gave him delicate tension, why did he say that when she was the one that was nervous.”

“When I act, I usually analyze and study, but in Mr. Sunshine, I had this feeling of falling into the role. Even though I had to read the script, I still had those moments; as an actress, I believe those special moments are what I got from this TV show.”

He mentions that, “KTR picks her words very carefully; she does this because she wants to convey her own beliefs fully instead of just pretending that she is being thoughtful….we can see how truthful and smart she is.” They also go into a conversation they had were Kim Tae-ri explained that, though she is 166cm (5’6″) now, she was small growing up. She also started school one year early. “After eating kim bap she had a thunder strike of realization, ‘Ah, that’s why I was small! I was not fully grown yet like the other kids.'”

“I am a rookie and for a lot of people I am a new face so maybe people want to treat me like a new baby. I don’t have especially lovely characteristics or anything.”

As far as her coworkers, they all said the same lovely things about her. For instance, she has a smile like a girl in a manwha, she has pretty energy, the director mentioned that he did not have to say anything extra to her. If he yelled at her (they seriously said yelled) then she would own up to her abilities, turn around, and clench her fists – that is her style. Another actor, Jung Hyun, from an independent film before Agasshi came out, said that “her gaze from her baby face showed ambition and greediness. I thought she could do it.”

“When I first read the script, Dong-mae and Hee-sung were difficult men for Aeshin to love, however, it was very different than I expected when I met them through acting. They are all attractive people with their own pain. I was even about to cry whenever I saw them in the script.”

The accompanying photos, by the way, are gorgeous. They are mostly beauty shots because they care nothing about anything but her face. I can not blame them because she does have an interesting and cute noggin. She is also dripping in delicate and clean diamonds which are best showcased with her delicate and clean features. I especially like the shots that have bubbles in them. Who would have thought a cheap child’s play thing, created to be happily watched and delightfully destroyed, could pare so well with the most expensive and indestructible rock on earth. I have never thought about popping bubbles with diamonds, but now I want to.

All photos are showcasing Tiffany & Co. jewelry from their Paper flower diamond collection. The brown knit top is by Low Classic. The beige cashmere turtleneck top is by Jain Song. The linen suit and silk blouse are by Jaybaek Couture. And the light grey turtleneck knit is by Vince. 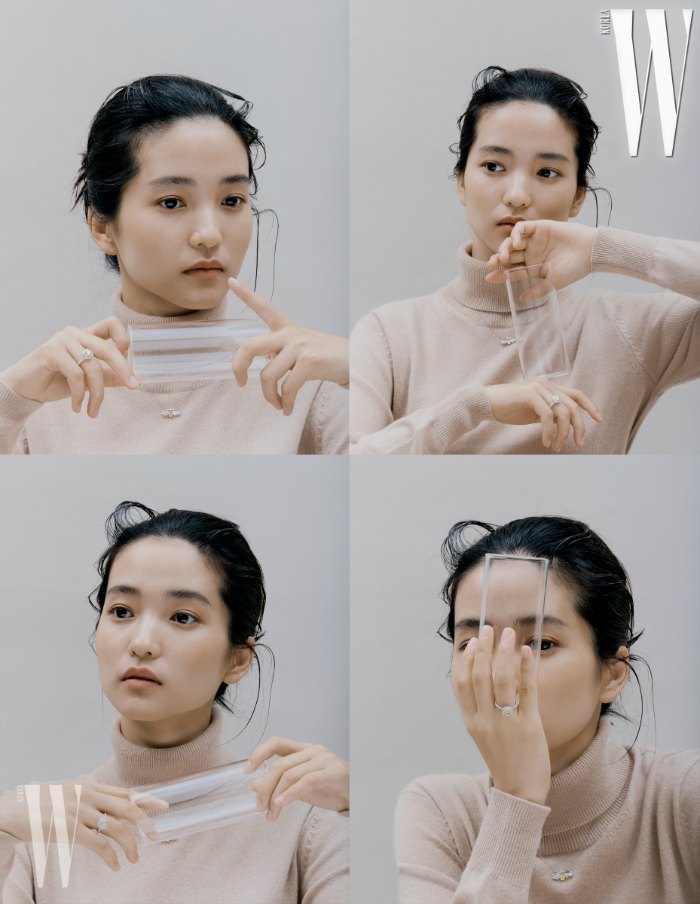 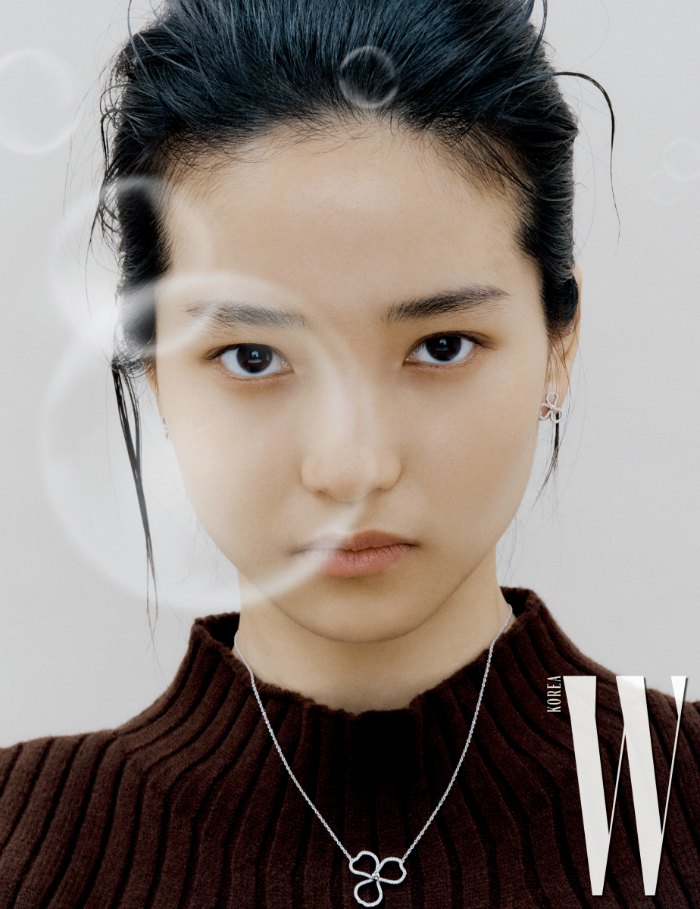 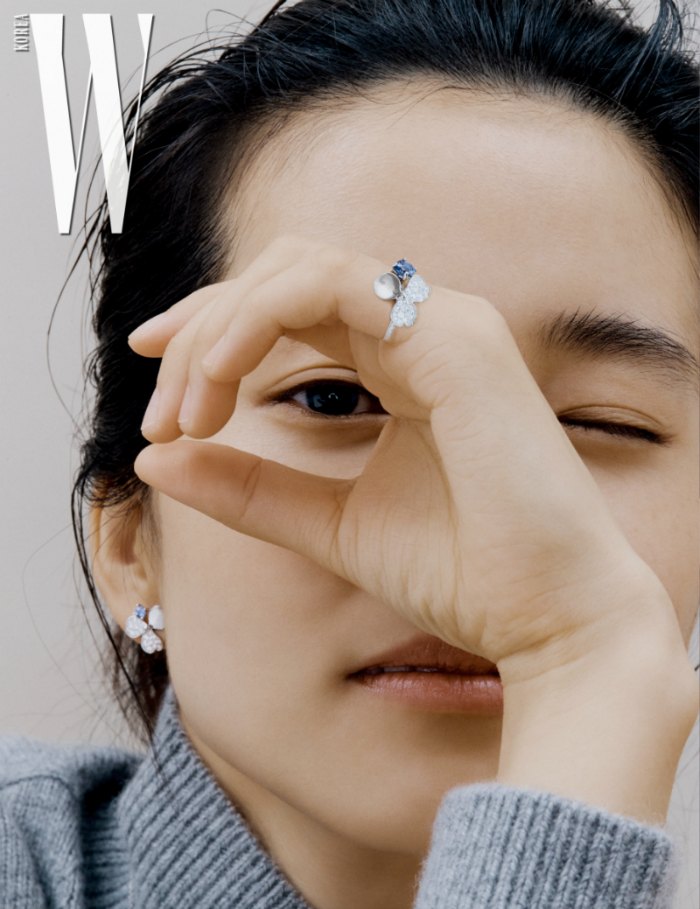 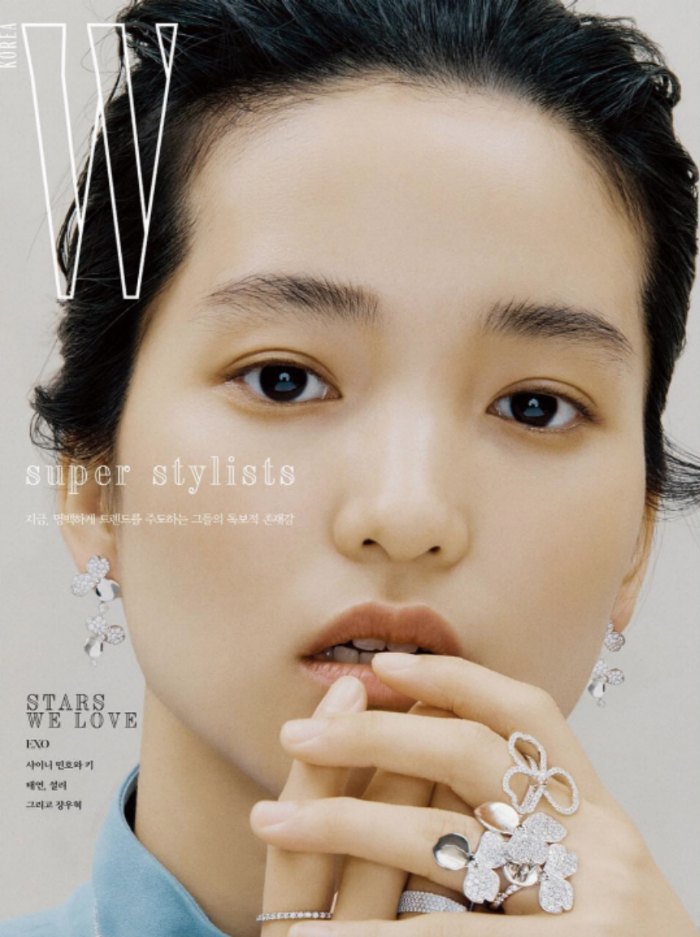 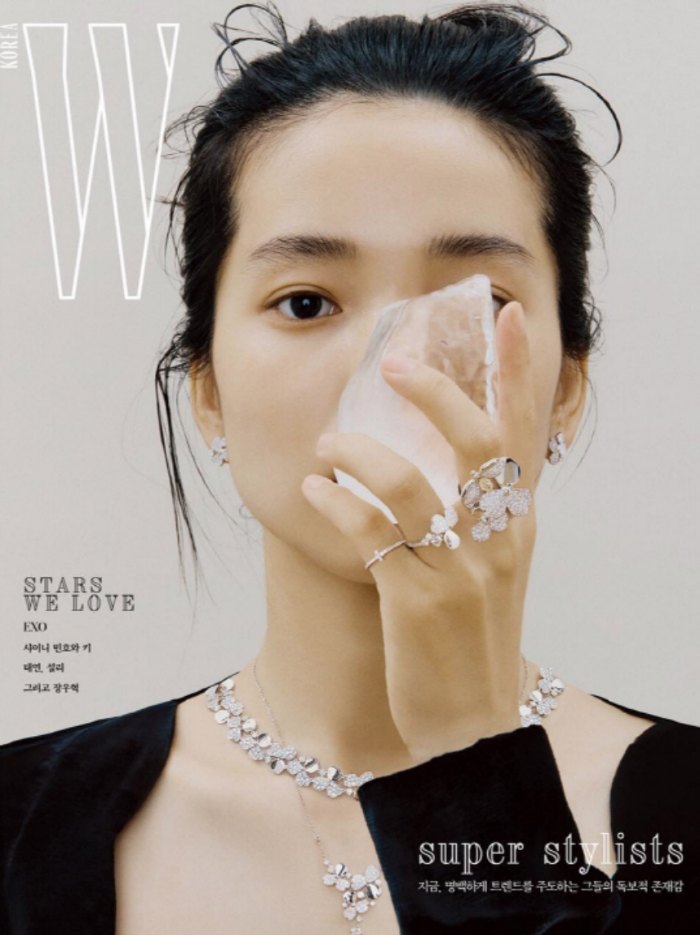