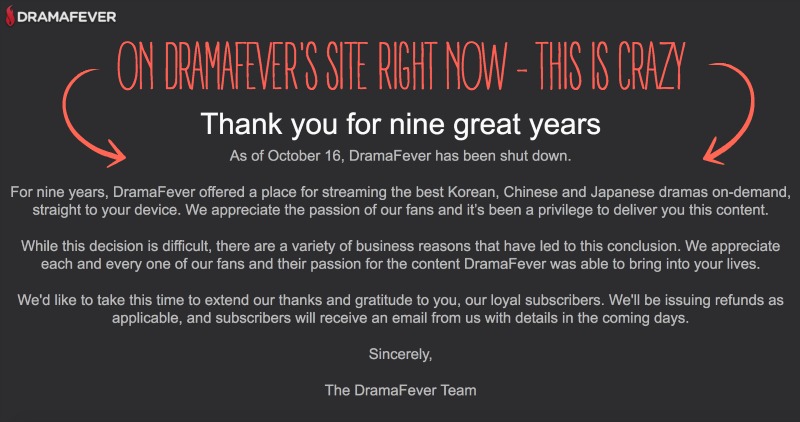 Basically the shock of the day. Y’all this is so crazy and unexpected. Dramafever is closed – for good. That is a weird thing to write considering I thought they were a leader in the industry (I mean, weren’t they just at Kcon in LA?). Amazon Prime, Hulu, and HanCinema all use/used Dramafever for their streaming services. What in the world is going on? I have a subscription to Dramafever and did not get any news about anything related to the possibility that they would be closing shop in the coming days. They still have on going shows that they are streaming which makes me think that this was not a decision that Dramafever made, it is most likely something that happened with the higher ups.

After googling it for a moment, I read a very nice article at Variety that went into a good amount of detail on the sudden closure. The Variety article mentioned that Dramafever was purchased by Warner Bros. in 2016 where Dramafever was incorporated into Warner Bros Digital Labs. Here is what they released in a statement Tuesday

“Today, Warner Bros. Digital Networks will be closing its DramaFever OTT service due to business reasons and in light of the rapidly changing marketplace for K-drama content, a staple of the service’s programming…Warner Bros. Digital Labs, which encompasses more than two-thirds of the DramaFever workforce, will continue operating, serving as the tech engine behind many of WBDN’s operations.”

Which sounds to me like they did not know what to do with Dramafever after purchasing it and, instead of working with them, are rather cutting it from their Digital Labs branch of Warner Bros. Twenty-two people will be laid off as of right now and I’m sure a slew of contract workers no longer have that job as well. Wow.

Variety mentions that the price of a Kdrama might have been a deciding factor to Warner Bros. I guess Kdramas used to be cheap, but now pull in a whopping $1 million per series. I can understand that, with Netflix getting into the mix, but was that really enough to close the entire site? Couldn’t they have pulled back in other ways? Raised the price a few bucks? This really reminds me of that drama Life where the CEO came in and immediately cut the least performing branches of the hospital without talking to anyone about it. I have a feeling that might be going on here.

But don’t put the blame solely on the feet of Warner Bros. AT&T acquired Time Warner this year to the tune of $85 billion. Warner Media was a company created after that consolidation with plans to anchor their streaming service through HBO. They explained up front that some changes were going to be made; getting rid of Dramafever was apparently one of those changes.

A shutdown with no notice makes no sense. I mean some people were watching a show, paused to get something to eat, came back and – surprise, no more site. What in the world. It really feels like an April Fools Joke and makes me think that this is still a joke of some kind.