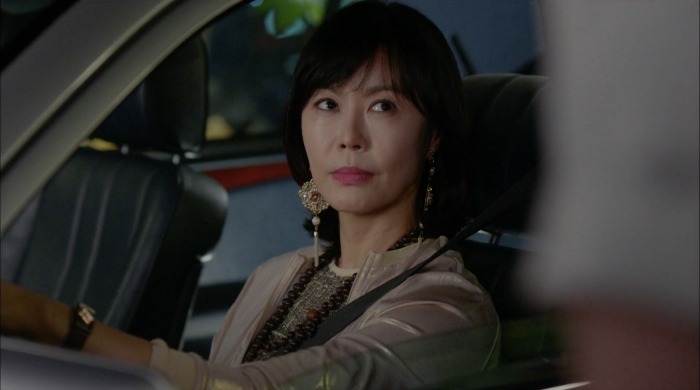 The Namil apartment’s owner is hands down one of my favorite characters in the drama (along with coach-nim). What is her deal? Is she like a fairy godmother to the Fantastic Four, or only to Ae-ra? KBS released a character profile for her that is elucidating. We will also tackle some other things we have found out through watching the drama, like her first appearance in the drama and all the little clues that the writer is giving us about this mysterious woman. Let’s dive right into this character we all know as the Namil Apartment Owner Ajumma (only, don’t call her ajumma).

(This woman is a Fendi bag of mystery) 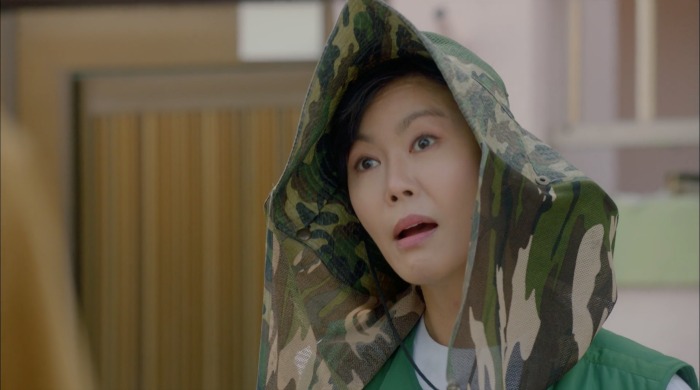 Whenever people call her ajumma, she always corrects them right away. “I am not ajumma, I am Kanako Hwang.” Her real name is Hwang Bok-hee. It is impossible to guess her real age or where she is from. She still has a wrinkle-free face and a nice body. She is the biggest mystery in Oksudong.

Because her character stands out, she has a lot of rumors. Someone thinks she is a second wife of a company president and got a lot of money after divorcing. Or maybe she is the girl of a yakuza, or not? Maybe she is a virgin? But according to the rumors, you can make a 100 episode morning (daytime) drama about her life, but nothing is for sure yet.

She is the real owner of Namil villa. She moved to the 5th-floor penthouse of the villa and her actions are unexpected (cleaning things and welding and stuff). But why did she move to Namil Villa all of a sudden?

SHE IS A NEWCOMER TO THE AREA 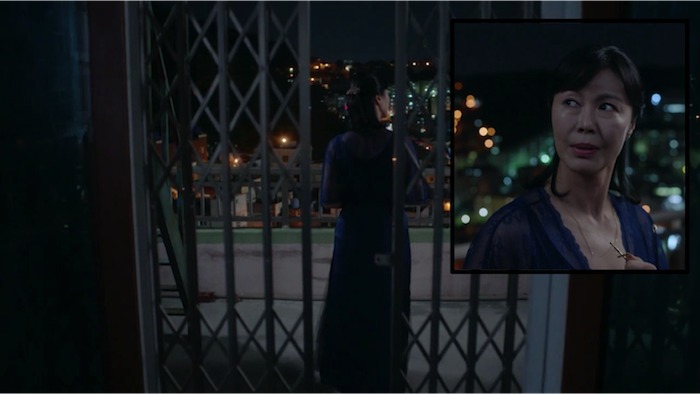 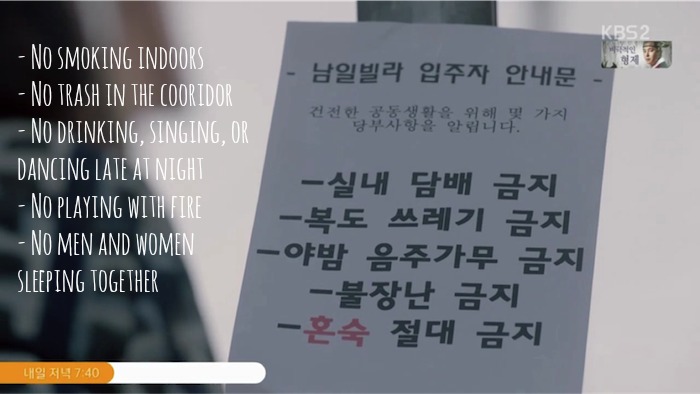 She wants the villa to be a quiet peaceful place. After our first introduction to her we see her post a note on a sign. The note reads as follows:

She also routinely confronts the Fantastic Four about sleeping together (They*Should*Not!) and told Hye-ran that she cannot stay in the villa because she looks like she gets around. Well, she didn’t say that per se, but she alluded to it. Have I said that I love her yet?

Give me all the money you have on you right now 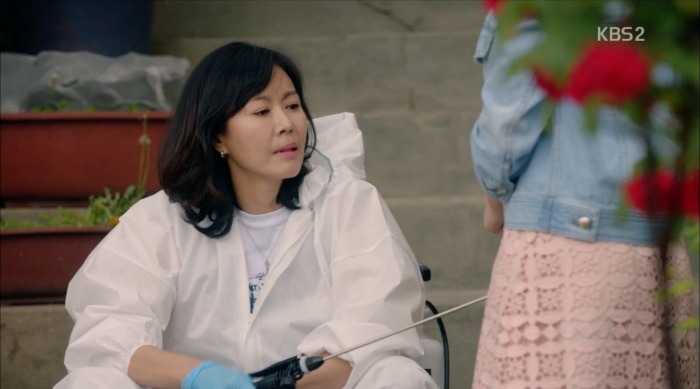 Whether she is a gangster or not has yet to be elucidated, but she is gangster. Owner Ajumma has this gangster swagger about her. She does things her own way. She welds, she pours cement, she puts up wallpaper and paints, she tells grown ass men to move their car. Why? Because she wants to M**F**er. She is not bossy, she is the boss. Now everybody fall in line or get out the way.

In episode 5 Owner Ajumma tells Ae-ra to give her all the money she has on her at the time. Ae-ra does as she is told, but it left a weird feeling with her. Was she just robbed? However, the owner has a soft spot because Ae-ra asked if she could pay her rent at another time (due to the fact that she was fired). But the owner just told her to give her what she had on her right at that moment. Hmm, does she care about Ae-ra?

SHE IS RICHIE RICH

She flosses on the regular 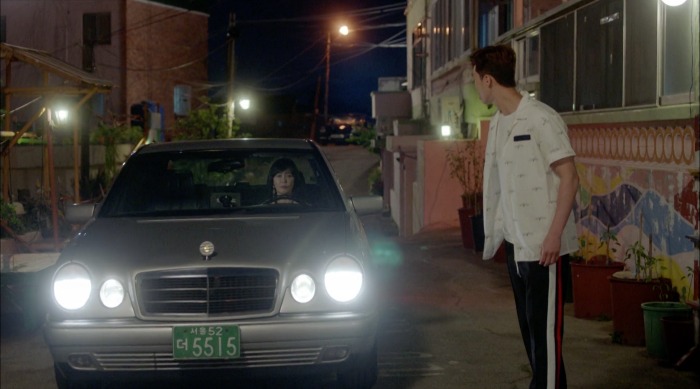 We see her wearing expensive clothing and shopping at expensive places. This woman is fabulous and has the car, wardrobe, accessories, and building to prove it; she is blinged out to the max. But where does all of this money come from? We have no clue because her money has not been mentioned yet. Is she the ex-wife of a CEO or the ex-First Lady of a yakuza? Or maybe she is the daughter of a rich family? Or perhaps, she came upon this money on her own? I am itching to find out. 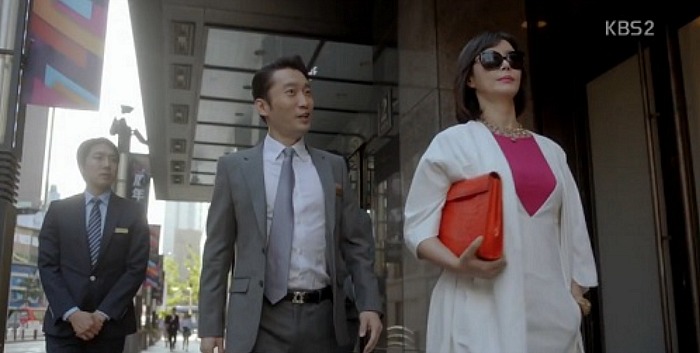 Owner Ajumma cares about right and wrong. Or at least she cares about right and wrong when it involves Ae-ra. We find out in episode 6 that Owner Ajumma is a bad-ass-B. Not only is she Richie Rich, the kind of rich that people trip over themselves about, she also wields it for justice. She tells the department store that the VIP woman who was a thief and got the information girl fired is well known for being a thief. They need to blacklist her or Owner Ajumma will do something about it. Oh, hells yeah.

SHE IS NOSEY ABOUT AE-RA

They should not sleep togethaaaaaaaaaa 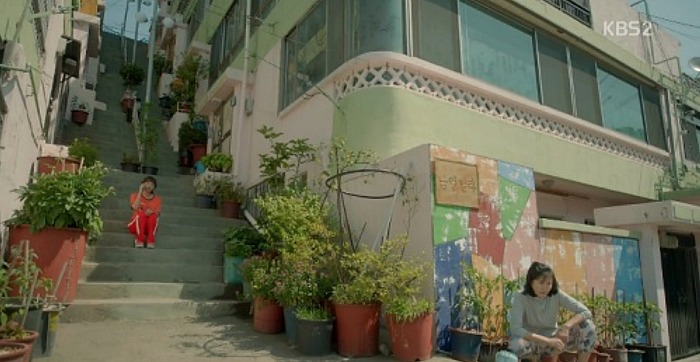 Which brings us to why she even cares in the first place. She knows everything about Ae-ra and the people that surround her…um, why? We get our first taste of her caring about Aera when Ae-ra passes out in episode 6. Owner Ajumma quickly ran to her side and looked alarmed. Later she tells Dong-man the exact room that Ae-ra is in at the hospital: the penthouse room. What to the what? The penthouse what? However, it is not clear if she bought the room or if Moo-bin purchased the room. Later we hear Moo-bin bragging about the room and how expensive it cost. Ah, so maybe Moo-bin purchased the room.

However, after we find out all the low-down-dirty-tricks Moo-bin had been pulling, we find out at the end of episode 7 that Moo-bin did not purchase the room. Who else could have purchased it? Dong-man? I don’t think so, that boy is just trying to make it. It must have been Owner Ajumma.

As mentioned previously, she is okay with Aera only giving her some pocket money for rent. What kind of landlady is okay with that?

In episode 9 we see owner Ajumma spying in on Ae-ra, hmm…is that how she knows everything about the Fantastic Four? She listens to Ae-ra’s conversation with her father intently, her face showing deep concern and thought. This woman definitely cares about Ae-ra in some capacity, but we are not sure why. How far is she willing to go for Ae-ra? At the end of episode 9, we get our answer as she finds out Ae-ra and Dong-man are both missing from their villa’s! Oh, hells no! They should not sleep together (rule #5 yo)! She books it out of there and drives like a demon to the beach (or so we think?). It is on and popping in Daechon.

In episode 10 when find out that she is definitely in Daechon. Somehow she finds out what motel Ae-ra is in and confronts the owner of the motel about it. However, she hides when she see’s coach-nim and Ae-ra’s father coming in. But what for? She has seen Coach-nim on many occasions, but this is the first time she has seen Ae-ra’s father. She must be hiding from him.

HER AND COACH-NIM KNOW EACH OTHER

No, they don’t, now eat your food 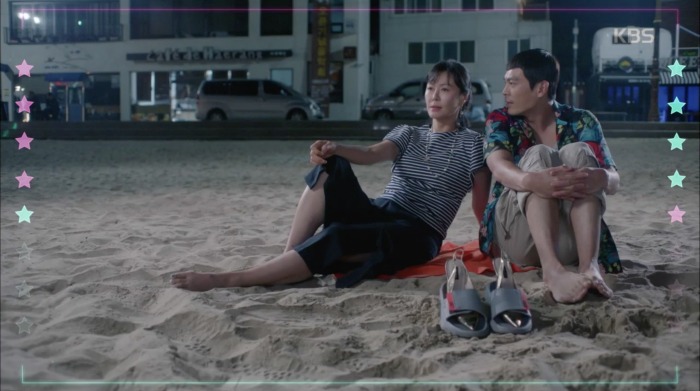 The writer doesn’t wait to give us a little bit more information though (I love this about them) because 24 hours later, in episode 10, we find out that Coach-nim and Owner Ajumma do know each other! They ran into each other at the Daechon showdown at the motel (when Dong-man was getting his ass whopped by Ae-ra’s father). Owner Ajumma hid from Ae-ra’s father and then listened in on the door while Dong-man was getting scolded. She seemed concerned, should they call someone? But instead, her and Coach-nim went out to eat something. While eating something Coach-nim reiterated that he knew her. But Owner Ajumma just threw her head back and said they don’t know each other, now eat your food. She is not bossy, she is the boss.

But in the epilogue of Episode 10, it is confirmed! They know each other! Coach-nim looks amazingly comfortable with her on the beach as he tries to fire some firecrackers and then runs over to her side like a little puppy. She is his noona, possibly from his hometown. Her real name is Hwang Bok-hee, but she is going by Kanako Hwang now. The plot thickens!

I kind of think Kanako has some gangster ties (oh, I am going to start calling her Kanako now). It makes sense because Coach-nim is a Taekwondo black belt silver medalist and usually the fighters and the gangsters all know each other, especially from their generation. Is she Ae-ra’s Mom? I don’t really think so. It could be possible if Ae-ra has never met her mother before and has never seen a photo of her, buuuuuut no. Is she Ae-ra’s aunt or her Mom’s best friend from childhood? Or someone else entirely? We will soon find out!