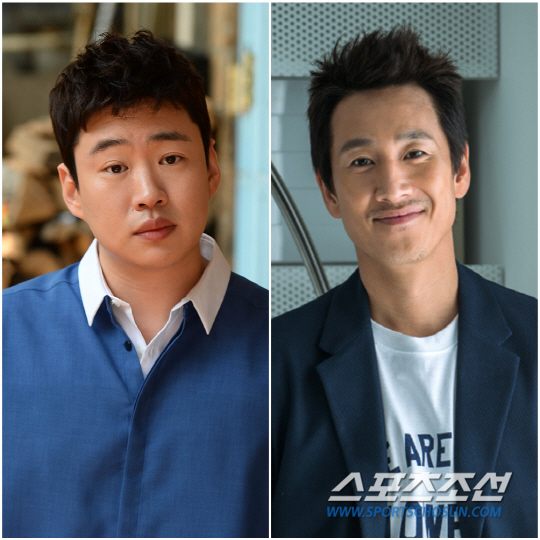 Aaaaand Ahn Jae-hong’s Sports Chosun interview is finally finished. This has to be the best one because I was really curious about his relationship with Lee Sun-kyun and this entire part III of the interview addresses that (if you missed it, here is part I and part II). It is below, enjoy!

Actor Ahn Jae-hong (31) talked about one of his long time best friends and seonbaes Lee Sun-kyun.

Ahn Jae-hong acts as rookie officer Yun Yiseo, who has a photographic memory, in the comedy movie “The King’s Case Note.” He told us the behind-the-scenes story of the movie and his whereabouts in an interview with Sports Chosun at Sam-chung dong, Jong-ro gu, Seoul on the afternoon of the 21st.

In 2014, he had his first main role in an indie film “The King of Jokgu” (directed by Woo Moon-ki) and became a so called “blue-chip of Chungmuro (Hollywood of Korea)”, then he exploded with the tvN drama “Answer me 1988” with his role as Kim Jung-bong, nickname “Bongbli”.

He became a “Rising star” with “Answer me 1988” then he went back to Chungmuro and shot the movies “Missing You” (2016, director: Mo Hong-jin), “The Last Ride” (2016, director: Lee Yo-sub), “Family hood” (2016, director: Kim Tae-gon), and “The Queen of Crime” (2016, director Lee Yo-sub); this year, he tries to take on different roles in movies like “Fabricated City” (directed by Park Gyang-hyun), “On the Beach at Night Alone” (directed by Hong Sang-su), and the newest movie, “The King’s Case Note.” Now he is busy with the new KBS2 Monday-Tuesday drama “Fight for My Way” (writen by Lim Sang-chun and directed by Lee Na-jung)

In the movie, it was Ahn Jae-hong’s first time acting together with Lee Sun-gyun, who played the smart king Ye-jong who has to solve all the mysteries by himself. He honestly talked about how he felt when he was acting together with Lee Sun-kyun, who is a good friend of his, “Each moment was very precious.” He first met Lee Sun-gyun when he was a student of Director Hong Sang-su. Lee Sun-kyun once said “I didn’t know he was majoring in acting,” when he talked about the first impression of Ahn Jae-hong. Ahn Jae-hong said “Of course, he didn’t know I was majoring acting. Just like now, I didn’t try to stand out, rather, I was trying to keep a low profile and participate in those projects quietly and consistently. My first impression of Sun-kyun seonbae that I am still remembering is him asking us ‘Are you guys students?’ during our short break, when we were acting minor roles in director Hong Sang-su’s project, he asked us ‘What class year are you in?’ and I said we are the second-class year in the acting department, then he talked about his own story. Sun-kyun seonbae was the first-class year at the Korea National University of Arts and he talked about his desolate college life without seonbaes. He told us we reminded him of his college years and bought us beef and tripe BBQ.” Then he continued “Sun-gyun seonbae was a very special seonbae for us. How can poor college students afford expensive beef and tripe BBQ? Of course I was thankful because he bought us delicious meals, but I am really thankful to him because he told us a lot of practical advice for the young actor hopefuls. I especially have this idea that Sun-kyun seonbae is the coolest seonbae ever.”

Ahn Jae-hong said “I became sentimental when I met this awesome Lee Sun-gyun seonbae in a movie together. Of course, working together with Sun-kyun seonbae for the first time wasn’t easy. We had a hard time for the first three sessions because our reactions to each other didn’t go well. After the third session, we spent 2 days together to talk about acting and work. Then it worked. Because I was new to a big budget commercial film and with my important role in the movie, I was worried a lot and clumsy. Sun-kyun seonbae was very understanding and guided me well until the end. With his experience level, he could have told me the right answer when a hubae is so confused, but he waited patiently until I found the right answer by myself and guided me step-by-step. While acting, I felt that he cared about me”

He also said “This project could have been very tough without the relationship with Sun-kyun seonbae. It was very precious time and we got even closer to each other. Most of the shooting locations were away from Seoul and when people had 3-4 days off, they went back to Seoul, but we stayed there and used a coin laundry or went out sightseeing. It was a very enjoyable moment.” He smiled.

The movie “The King’s Case Note,” based on a popular webtoon by artist Heo Yoon-mi, is a comical-investigational-action movie about King Ye-jong, who has a sharp sense of reasoning, and government worker Yiseo, an officer with a photographic memory but a few screws loose, who are conducting scientific investigations to solve a strange rumor that has shaken the entire city of Han-yang (old name for Seoul). It stars Lee Seon-gyun, Ahn Jae-hong, Kim Hee-won, Joo Jin-mo, and Jang Young-nam and is directed by Mun Hyun-sung, who directed “Korea”. It will première on May 26.